Thanks for following along with the Voices From the Flag Tour! Today, we’re traveling to several different places along the National 9/11 flag Tour with Wendy Hauser, including where the patching first began in Greensburg, Kansas. Wendy is a New York Says Thank You volunteer, helped with scheduling and mapping of stitching events and was one of the official flag tour photographers. Discover Wendy’s story below, view photos from the tour, and follow along at #VoicesFromTheFlagTour to learn more!
​

"The first time I saw The National 9/11 Flag was during my first annual build project with New York Says Thank You.  We were in Greensburg Kansas in September 2008 and The Flag had been brought to Kansas by Charlie Vitchers.   It was at the Carriage House Assisted Living Center and a team of volunteers were working to bring The National 9/11 Flag back to life.  I was taking some photos of the build effort and one afternoon I made my way to the Carriage House.  The Flag was laid out on multiple tables and people were gathered around sewing different areas of The Flag.  You could tell The Flag had gone through a horrific event as about 40 percent of it was missing.  One person sewing was Fred Turner.  He and his wife Charlene drove from New Mexico to Greensburg, Kansas after hearing that The New York Says Thank You Foundation was going to help rebuild a 4-H barn that had been destroyed in a tornado what leveled 95% of the town in 2007.  Personally connected to September 11th and the World Trade Center site, but unable to help with the build project due to the rain soaked and muddy field, Fred and Charlene came to the Carriage House to give back and help heal.  And (an interesting note) on May 19, 2011, when The National 9/11 Flag made its way to Gallup, New Mexico, the Turner’s were there to place their stitches in The Flag during the restoration project, thus helping to restore The Flag a second time.

The next time I saw The Flag was at the concluding ceremony of the Greensburg build project.  It looked awesome with 11 flags recovered from the Greensburg tornado sewn into The National 9/11 Flag.

In 2009, while at the Little Sioux Ranch, Jeff talked about taking The Flag on a tour throughout the United States.  In mid-2010, as I was thinking about the 2010 build project in Arkansas, I called Jeff and asked him what was going on with The Flag.  After all, I had checked out the New York Says Thank You website and while The Flag had visited some locations, it did not appear to be “on a tour.”  Jeff told me the plan was to travel to each state and restore The Flag to its original 13-stripe format with stitching ceremonies in each state.  Jeff had someone who was working on how to do the restoration but wasn’t sure what states to travel to at what time.  I offered to help develop the tour and, of course, Jeff said “yes.”  He always does!

My first step was to research each state, noting important events to identify places we should strive to have the state ceremonies located.  The document included historic or cultural events, a date of tragedy or a disaster, significant sporting events, significant meetings and photo opportunities.   From this document we were able to set a course to reach out to various locations. 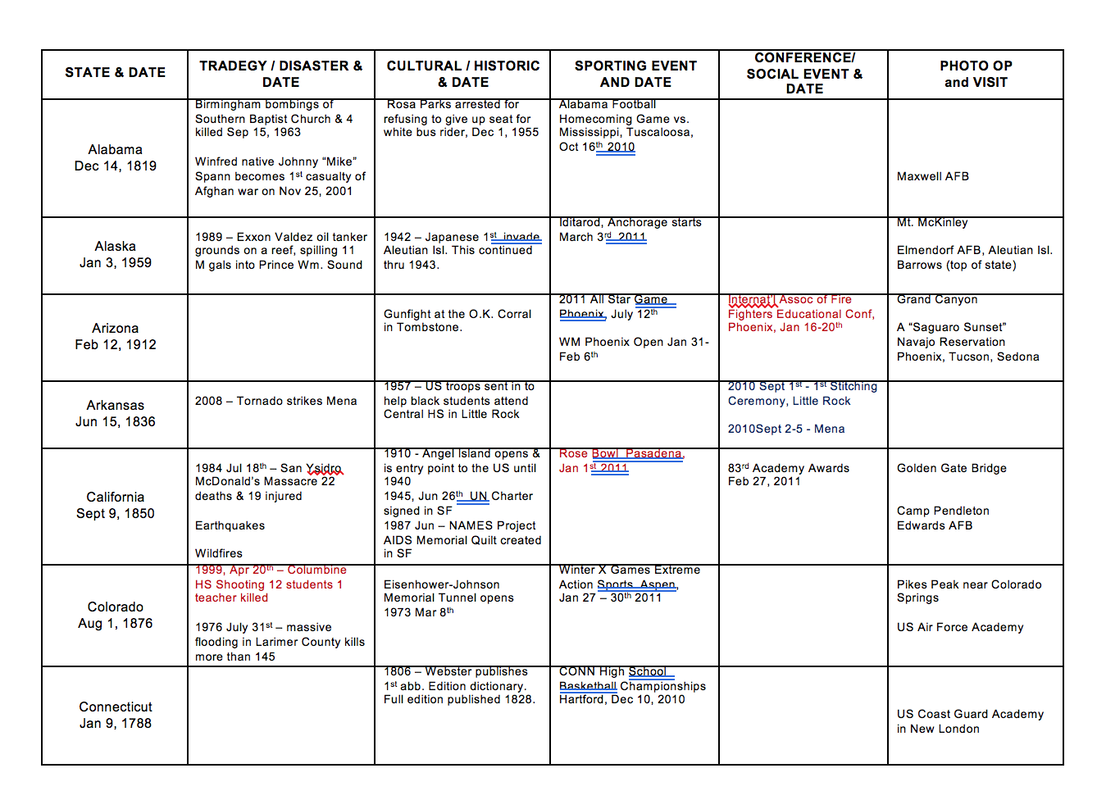 A page from Wendy's research and location mapping document. © Wendy Hauser
The tour started on September 1, 2010 at the State Capitol in Little Rock, Arkansas and concluded on September 11, 2011 in Joplin, Missouri.  After the tour concluded, my family asked which ceremony I enjoyed the most.  Such an impossible question to answer!  Every ceremony I attended was unique, special and memorable.  The best part of the tour was meeting people across the United States.  It was uplifting to hear the stories of American heroes and people who just give of themselves to better their communities and their country.  And it was a thrill to see peoples’ reaction to The Flag, whether they were in awe of The Flag’s size or excited to place their stitch in The National 9/11 Flag.  Everywhere we went people thanked us for giving them the privilege to help restore The National 9/11 Flag.  But to me, the privilege was mine.

This tour was “From Sea to Shining Sea.”  From Greensburg Kansas to Little Rock and Mena Arkansas, Veterans Homecoming Week in Branson Missouri, the USS Missouri at Pearl Harbor, to Fort Hood Texas, Columbine High School and Oklahoma City, the Kennedy Space Center, The King Center, a Military Tattoo Ceremony at Wright-Patterson Air Force Base in Ohio, Hines VA Hospital in Illinois, the Run for the Wall in Gallup, New Mexico where Navajo Code-Talkers Keith M. Little and Joe Vandever Sr., Bataan Survivor Tim Smith and Congressional Medal of Honor Recipient Hiroshi H. Miyamura placed their stitches, to Mount Rushmore, this was a phenomenal tour!  The National 9/11 Flag was even the Grand Marshall at the July 4th Parade in Southport North Carolina.  It was truly amazing to be at many of the ceremonies and witness the honor and respect shown not only to The National 9/11 Flag, but also to the countless military members, fire fighters and police officers across this country.

Every year, as we finish an annual build project the weekend before September 11th, we end the event with all volunteers gathered together and shout … NEW YORK SAYS THANK YOU!!!

So here is my shout-out … THANK YOU AMERICA!!!" 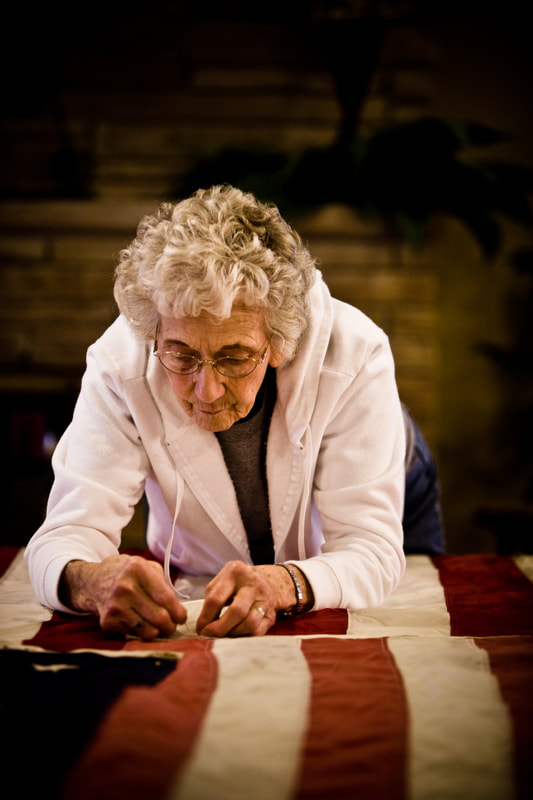 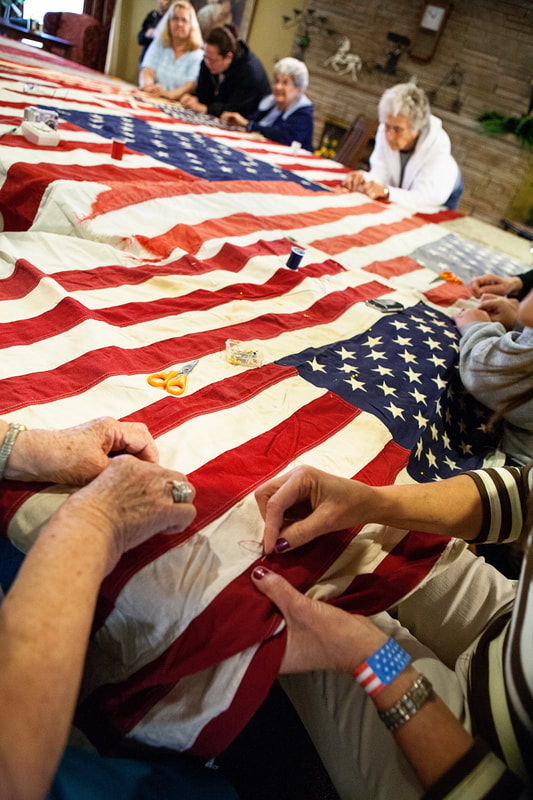 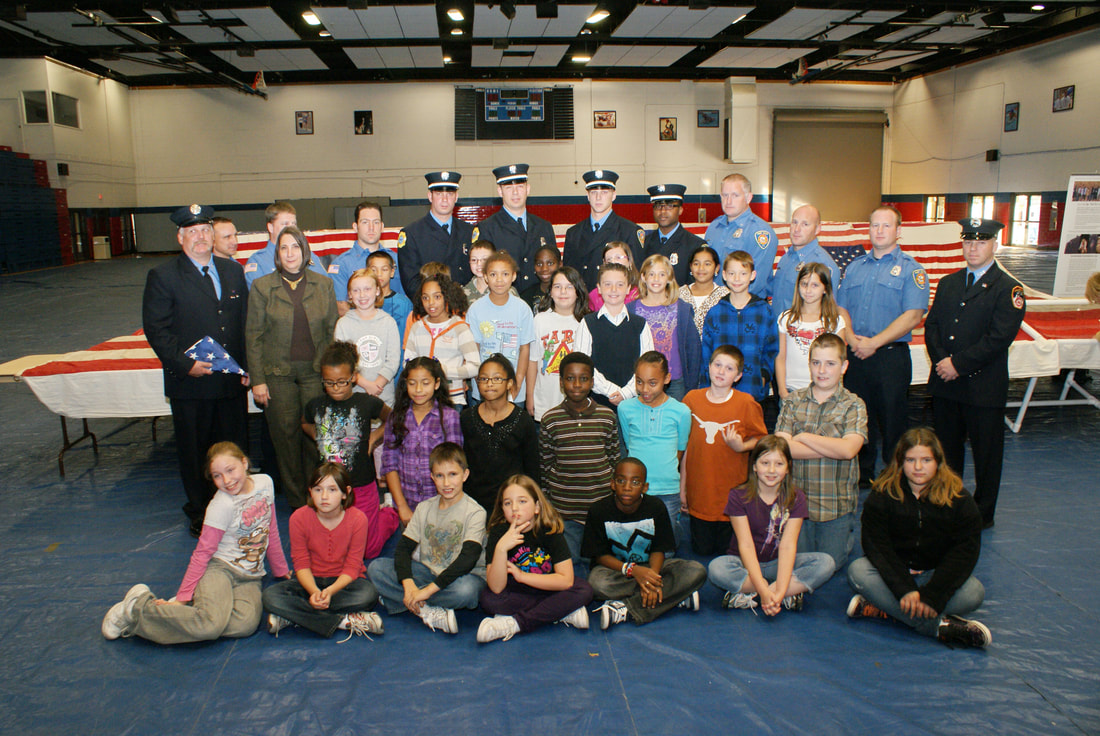 "How did we end up in Southport NC?  Here's what I know:

The National 9/11 Flag came to Southport, NC due to the efforts of Joan and Dick Stewart.  The Stewart's first heard about the National 9/11 Flag in 2010 as they attended a ceremony honoring their son, Rich and others who lost their lives on September 11th. Rich was working on the 104th floor of the north tower on September 11, 2001.  The 20X30 foot flag hung as the backdrop during the ceremony.  After sewing a stitch in the flag, Joan asked the New York Says Thank You Foundation that was overseeing the Flag Tour when the Flag would be in North Carolina.  She was told the Flag Tour was still looking for a sponsor to help coordinate the visit to North Carolina.  Joan said she could do this and convinced the foundation to let the flag spend the Fourth of July in Southport.  She spoke with Don Parker, a festival co-chair who was working in the Pentagon on September 11th.  The committee named the National 9/11 Flag as the parade marshall to honor those who lost their lives on September 11th.

Southport has been know to have the longest running July 4th celebration in the U.S.  The area's first July 4th celebration was held in 1795 at Fort Johnston in Smithville.  The first parade was held in 1844 when after a 13-gun salute, a procession moved from Fort Johnston to the church across the street.  Over the years, additions were made to the parade and the route was expanded.  In 1887, the town's name was changed from Smithville to Southport.

The parade route handlers were first responders, military members and veterans and boy scouts.  While on the parade route, the flag was periodically turned toward the crowd and displayed so people could see the flag.  After the parade, the stitching ceremony was held at the Southport Baptist Church.
​© Photo Credit Wendy Hauser/New York Says Thank You Foundation

Wendy traveled with the flag to many places across the United States and had the opportunity to place stitches in the flag at various locations and with various special people in her life. 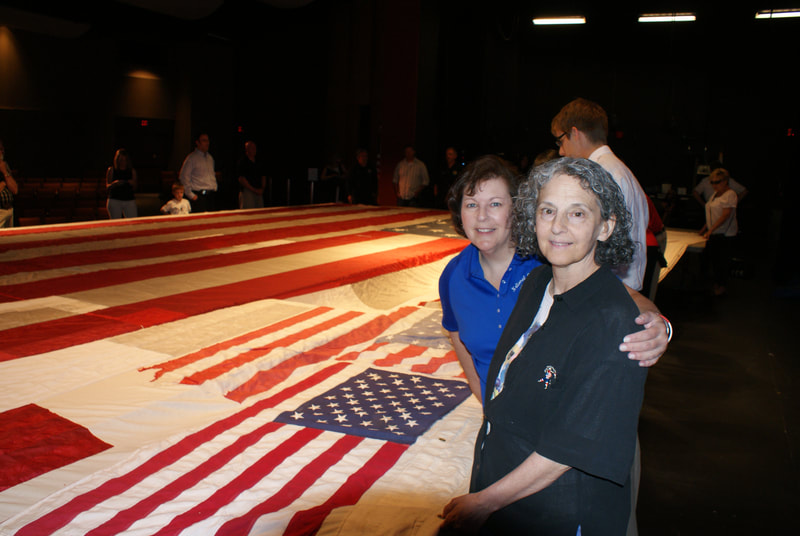 Wendy stitching the flag with her sister Kay Hauser at the Jewish Community Center of Metropolitan Detroit, West Bloomfield, Michigan on July 10, 2011 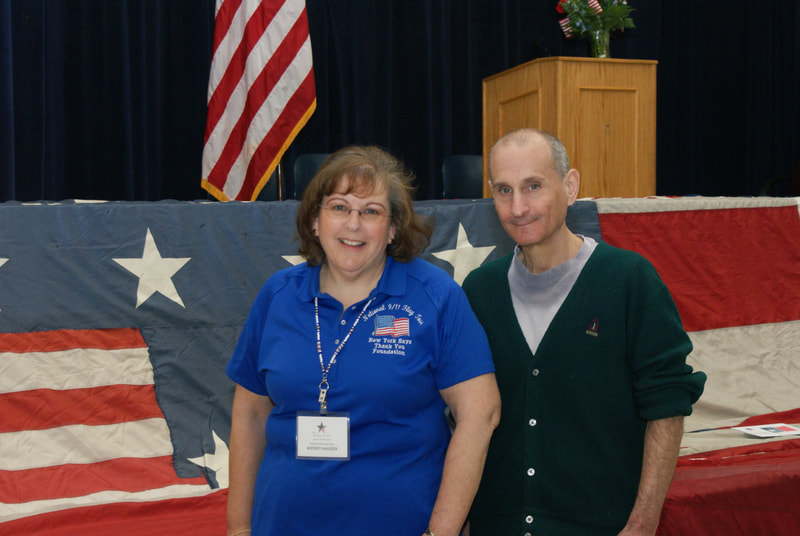 Wendy stitching the flag with her brother, Meryl Hauser, at Hines VA Hospital, Hines, IL on May 3, 2011 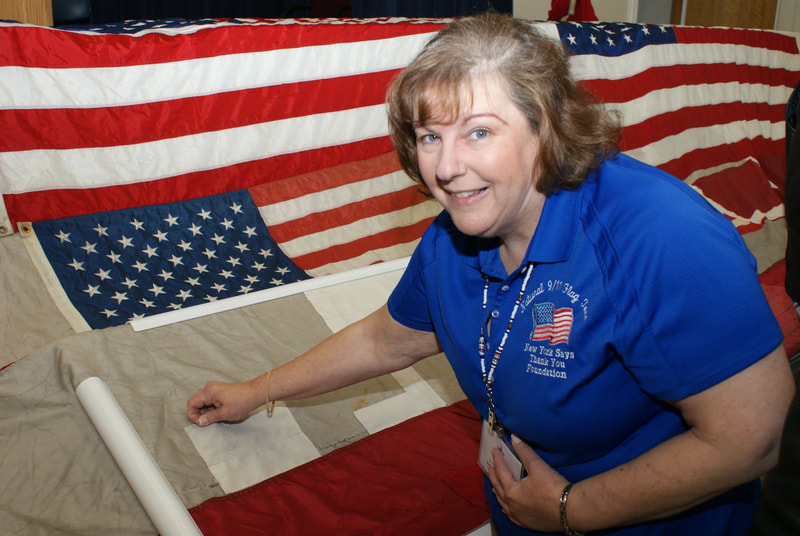 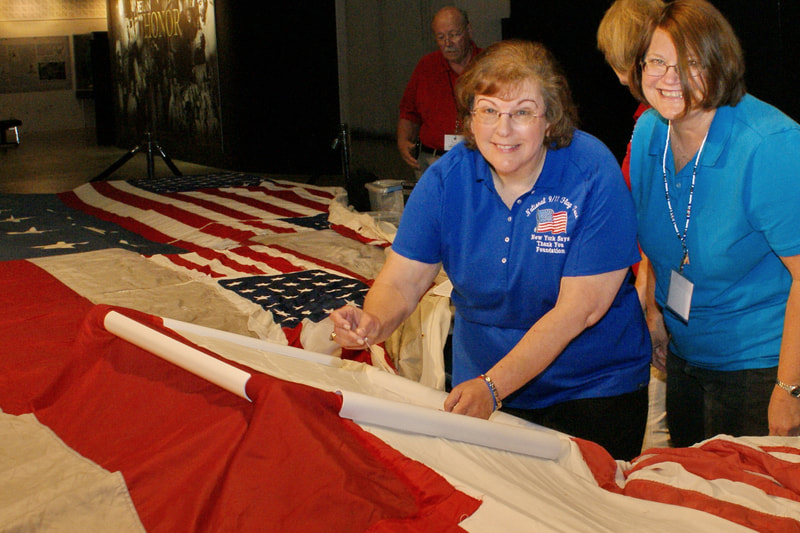 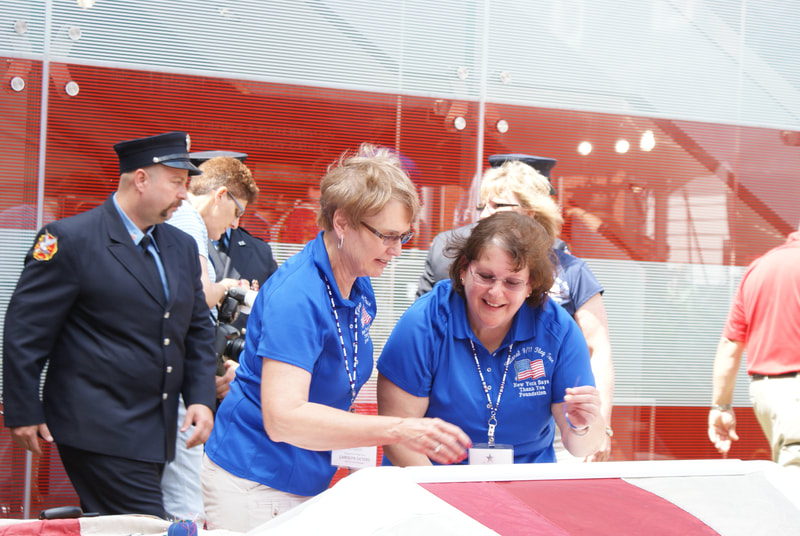 Pictured below is Judy Rosich. Judy was nominated to place a stitch in the flag to recognize her dedication to community service. For many years, Judy served on the board of Warm Babies, which collects donations for infants born in Colorado who start their lives in less than favorable circumstances. Her home was used as a drop point for many friends to leave donations, which Judy would collect, sort, and later deliver to the organization. Judy is also a fabulous seamstress and quilter and loves to make quilts for ABC Quilts, a charity that provides quilts to abused and battered children. During her trip to Columbine HS, Wendy captured the pictures below of Judy placing stitches with her grandchildren. Judy's granddaughter is now entering her first year of college and her grandson will be a sophomore in high school. Also pictured is Judy's daughter, a Columbine High School graduate, placing stitches with her children.

Judy says, "So much has happened to all of us and to our nation since that time.  Hopefully we will all be able to continue to honor and respect our nation as so many before us  have.  Unfortunately, for many people that meant sacrificing everything.  It was a privilege to be able to put a few stitches in history in this flag, and I thank you [Wendy] so much for sending these photos so my family and I could continue to keep it in our memory bank."
​
​© Photo Credit Wendy Hauser/New York Says Thank You Foundation
BUY THE BOOK