The Voices From the Flag Tour continues and today, we’re meeting Steven Walis. Steven’s connection with the flag began when he was a Boy Scout at around 14 years old when he began volunteering with his father, Jack Walis as part of the New York Says Thank You Foundation. Steven’s father was an FDNY firefighter on 9/11 and later became Honor Guard for the flag restoration tour. Steven will take us to some of the special places he traveled with his father and the flag including, Kansas, Arkansas and New York. Read more of Steven's story below and follow along at #VoicesFromTheFlagTour to learn more! 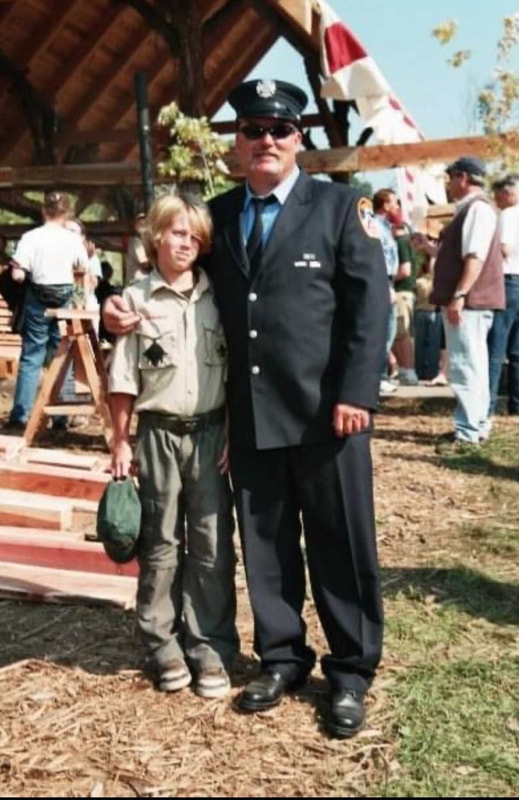 Steven Walis (left) and father Jack (right) in Little Sioux, Iowa with the New York Says Thank You Foundation and the National 9/11 Flag stitching ceremony. © Photo courtesy of Steven Walis.
Today, we have the opportunity to learn the story of Steven Walis but first, Steven shares a bit about his father Jack with me.  Steven’s father Jack, is a retired FDNY firefighter and was a volunteer Honor Guard for the National 9/11 Flag Tour. Steven shared that on the morning of 9/11, his father was attending jury duty. As his father and those at the courthouse saw the attacks happening on television, Jack was excused. He came home, kissed Steven and his pregnant mother goodbye, and promised he’d be back. Jack drove to his firehouse, threw his bunker gear on, and went to find the fire truck in what he described to Steven as “a blizzard of ash.” Once he found where it was parked, it was caked in what looked like “gray snow.” He started it up, and drove it back to the firehouse where he learned he was the only one from his firehouse to survive. Jack worked at Ground Zero as part of the recovery effort and began volunteering with the New York Says Thank You Foundation shortly after 9/11. Through his volunteer work with New York Says Thank You, this is where both Jack and Steven's journey with the National 9/11 Flag began.

"As a young Boy Scout around the year 2012, I was about 14 years old, just entering high school. I’ve heard countless stories that my father, whose name is John Walis, had told me throughout the years about the Trade Center and many of his struggles that he still struggles with today. One of the men my father worked with, another firefighter named Jimmy Sands, asked both my father and I if we’d like to volunteer for the New York Says Thank You Foundation. This is when I got to meet Jeff Parness, Founder and Executive Director of New York Says Thank You. Jeff  has two sons, Evan and Josh. With Evan being my age I felt a bit more comfortable doing something I’ve never done before, and for a very good cause. My father and I both jumped immediately at the opportunity to help and next thing I knew, we were on an airplane flying to Little Sioux, Iowa. We were traveling with the National 9/11 flag to present it, have it stitched up, and most importantly rebuild a chapel where young Boy Scouts sought shelter during a tornado in their town. Four Eagle Scouts, the highest ranking a Scout can achieve, passed away during the tornado as they were seeking shelter in the chimney. As a brand new Boy Scout at the time, this really hit me hard. This was the start of my father and I’s journey. We visited and rebuilt many homes in places such as Mena, Arkansas, Greensburg, Kansas, and Ellijay, Georgia. In Georgia we built a 300 square-foot barn for a kind lady who developed Build An Ark Rescue Center. Her original shelter was destroyed in another natural disaster. This was all done while having the flag stitched up by many people of the towns we visited.

The restoration of the flag started in Greensburg, KS when members of the town saw the tattered flag and decided to help stitch it back together. But it doesn’t stop there. In between these yearly trips, which we would always do the week of 9/11, 9/12 was developed. It is a day of remembrance-all about the help and New York City coming together in one of the absolute worst events that could have taken place. All to help with recovery and cleanup.

Along with all of our volunteer trips, my father was given the opportunity to be a Honor Guard for the 9/11 flag along with other FDNY firefighters. The flag was presented at Dodgers stadium, Mount Rushmore, the Capitol, and even Crazy Horse in South Dakota.

The National 9/11 Flag visits Crazy Horse Memorial in South Dakota. Photo Credit © Wendy Hauser/New York Says Thank You Foundation
As the projects slowed down and the flag was coming to a full restoration we had one last project-rebuilding a home destroyed by Hurricane Sandy out in Long Beach on Long Island New York along with another home in Massapequa, New York that belonged to another FDNY first responder.

As the flag’s journey came to an end, a fellow Scout and best friend of mine joined me in helping transport the flag to its final resting place in the National 9/11 Museum where it resides today. My father, along with Jimmy Sands and another FDNY firefighter, walked the flag into the Museum. This was very, very tough for my father to experience. In the Museum, he saw pictures of people he knew.  He saw broken fire trucks and stairwells that brought back memories I wouldn’t ever want to put him through again. It was such a heavy experience that after we paid our respects to the flag he had guarded for many, many years, we left the Museum with respect, and that was the end of our journey along with the flags’. My father means the world to me and is my absolute hero. It makes me tear up every time I think about his story. Thank you for sharing his story.” 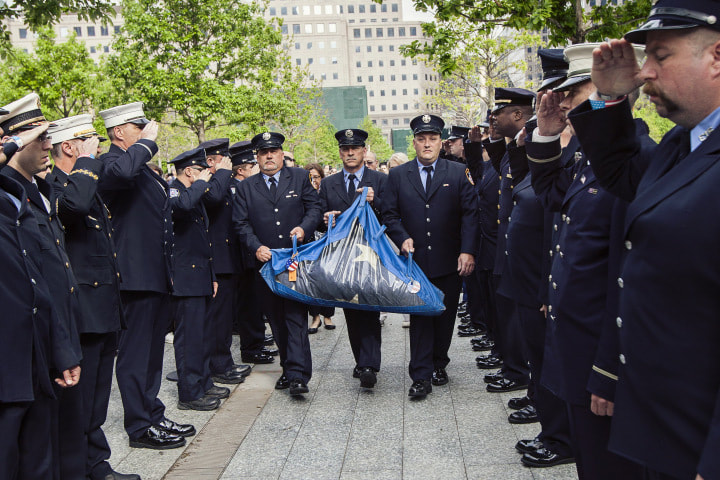