Thanks for following along with the The Voices From the Flag Tour. Yesterday we heard from Steven Walis who spoke to us about his father Jack. Jack is a retired FDNY firefighter and was a member of the National 9/11 Flag Tour Honor Guard. Today, we get to travel to The King Center in Atlanta, Georgia to hear about one of Jack’s most memorable moments from the flag tour. Read more ini my interview with Jack below and follow along at #VoicesFromTheFlagTour to learn more!

Amanda: That’s fascinating. Thank you for your dedication to keeping the flag safe throughout it’s journey. Where were some of the places you traveled with the flag? 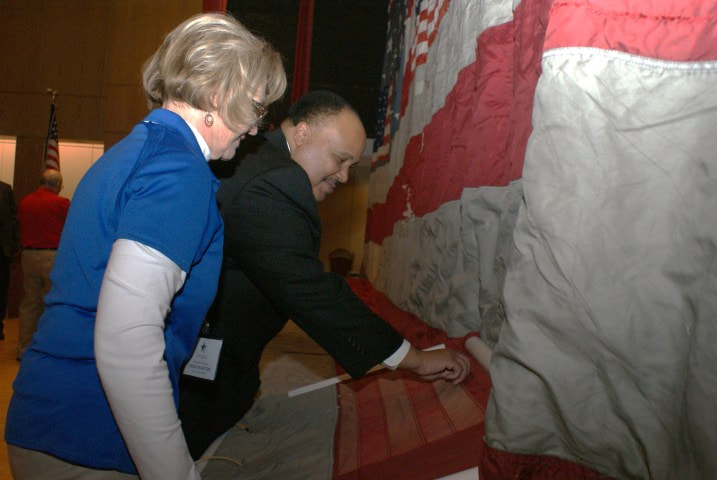 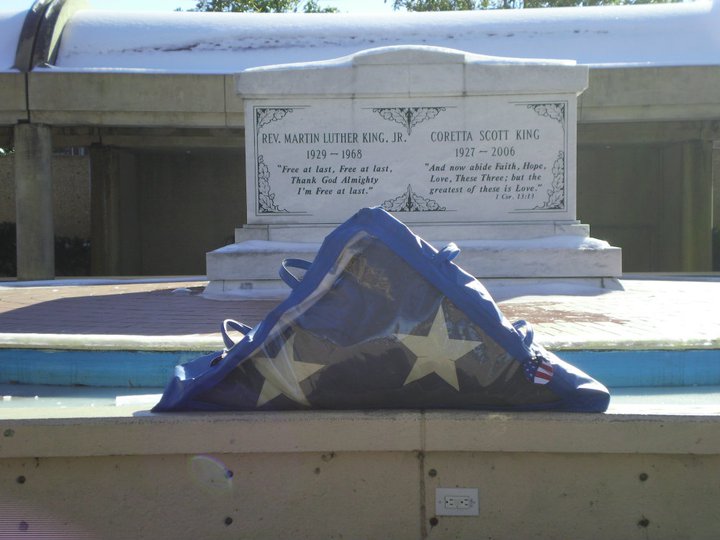 The National 9/11 Flag lay on the grave of Coretta Scott King and Martin Luther King, Jr. © New York Says Thank You Foundation
Amanda: That’s a lot of places! What is one of the places that stands out to you the most and why?

Jack: One place that stands out to me was while I was escorting the flag in Georgia. It was Martin Luther King Jr, Day, and we were in Atlanta at The King Center. We set up the flag for stitching ceremony as normal. But, what I wasn’t aware of, was that nearly 80 people from almost as many countries, would be taking the oath to becoming American citizens. How great is that? Right there, where we had displayed the flag. Each person got to put a stitch into the flag that day as they learned about the history of its origins.

Amanda: What a special experience for all involved. Talk about sewing together all of our different stories! With this in mind, what do you feel the National 9/11 flag symbolizes/what do you hope it means to people who learn about its story?
Jack: That to me, is what this flag symbolizes. That we are all individuals. We might not all come from the same place, but as Americans, we are sewn together in a way. We come together to lift each other up. The flag is about love and compassion. A symbol of hope.
BUY THE BOOK