The Voices From the Flag Tour continues and today, we’re traveling to Littleton, Colorado to meet Frank DeAngelis & Cristofer Welsh. Frank is the retired principal of Columbine High School and Cristofer is a former student at Columbine, who now teaches history at the school. The Columbine HS community donated the flag that flew above their school on the day of the shooting for incorporation into the 9/11 flag during their stitching ceremony in 2011. Read on to learn more about Frank and Cristofer’s story and the flag’s visit to Columbine High School below. Follow along at #VoicesFromTheFlagTour to learn more! 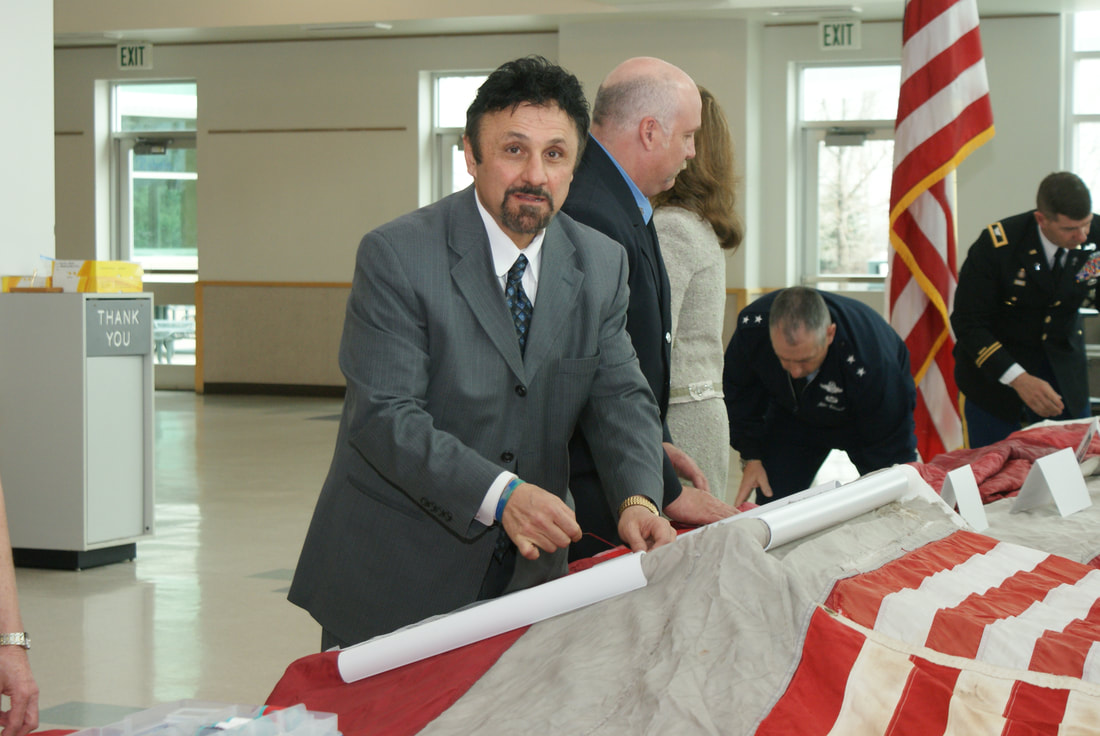 Frank DeAngelis was the principal at Columbine High School in April 1999.  When the New York Says Thank You Foundation visited Columbine in April 2011, DeAngelis was still the principal. New York Says Thank You volunteer, Wendy Hauser recalls: “While we were at the school, I remember hearing from someone that DeAngelis, after the 1999 shooting, decided he would remain the Principal until every student in the school district (K-12) had completed 12th grade. He retired in 2014.  He has since been an advocate for safety and security of schools, been on the lecture circuit, and wrote a book, They Call Me "Mr. De": The Story of Columbine's Heart, Resilience and Recovery, which was released in 2019.

On the day of our visit to Columbine, the school was hosting a musical event that evening. We stayed so the National 9/11 Flag could be displayed in the gymnasium at the start of the program.  A group carried The Flag into the gymnasium and a group of adults (from the Flag tour and some from the school/community), put The Flag into place walking up the bleachers and then the community held the Flag during a brief ceremony. It was totally ad-libbed and very touching.  Frank DeAngelis, after the ceremony, was a focal point in the folding of The Flag” 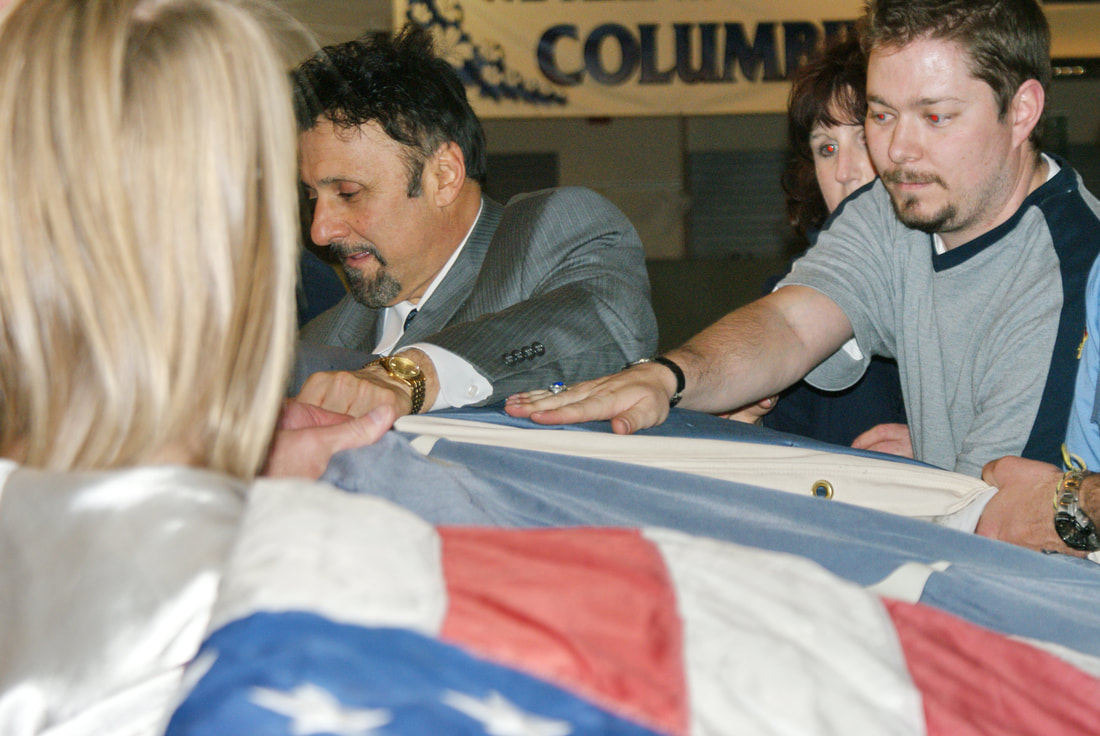 ​A Reflection from Cristofer

​
“My name is Cristofer Welsh and I am a teacher at Columbine High School.  I have been a social studies teacher here for 15 years, 13 of which I have been teaching AP World History.  I am a graduate of Columbine as well, which is why I decided to come back here to teach.  I first heard about the National 9/11 Flag restoration tour from my principal, Frank DeAngelis a little before the flag's arrival at our school.  I remember I was conducting my powderpuff (Girl's) Football practice when the sewing was to take place and I ended practice just a bit early so that I could participate.  I went down to the school's commons where the flag was laid out and a few of my colleagues were already sewing their stitch. I waited in line briefly and got my opportunity after about 15-20 minutes. I stuck around to chat with a few representatives of the project and was honored to also participate in the folding of the flag as it was being prepared for shipment to its next stop.  I placed my stitch near the bottom right corner.  I wanted to participate for several reasons. The first is that I am a history teacher, and one seldom gets a chance to be a part of historic events of this magnitude.  It was a way to say that I literally left my mark on something that our nation experienced as a whole.  The other reason was as a way to honor those who lost their lives on 9/11 and those who would go on to lose their lives in defense of this country in subsequent years due to those attacks.  Granted it was not much, just a stitch on a flag.  But the solemnity of the event I took as a way to keep those who have sacrificed in my mind.
​
The most important message embodied in the National 9/11 Flag is to never give up.  The flag, literally resurrected from the ashes from the World Trade Center, is a testament to the will of the American people to overcome and persevere.  One of the most important lessons to learn in life is how to bounce back from the trials and tribulations that life throws your way.  By rebuilding this flag, we are displaying the indomitable will of our nation to recover and attain new heights.
I also wanted to express my gratitude for the opportunity to participate in the stitching and your subsequent research.  I find these to be very worthwhile endeavors.”