The Voices From the Flag Tour continues and today, we’re meeting Elsie Cintron-Rosado. Elsie lost her daughter Maria on 9/11 in the building at 90 West Street where the National 9/11 Flag originally hung torn and tattered. Elsie placed stitches in the 9/11 flag in honor of her daughter and volunteered with New York Says Thank You Foundation at many of the stitching ceremonies. In my interview with Elsie she shares about some of the special places she traveled with the flag including her own town of Ocoee., FL.  Read more below and follow along at #VoicesFromTheFlagTour to learn more! 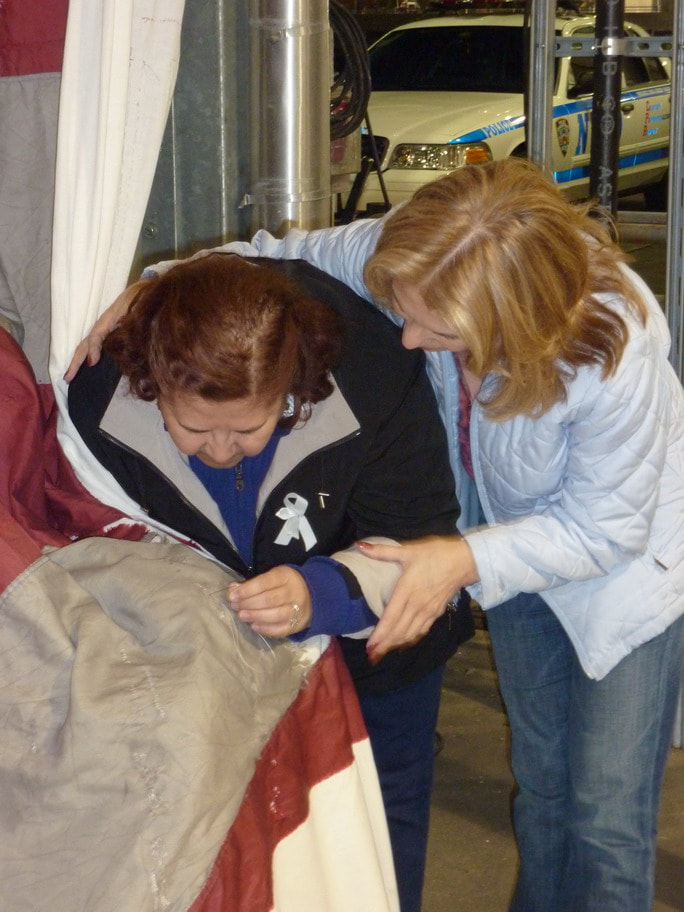 Elsie Cintron-Rosado and Mary Ferguson placing some of the first few stitches in the National 9/11 Flag. © New York Says Thank You Foundation

Elsie Cintron-Rosado lost her daughter, Maria Isabel Ramirez, on September 11, 2001 in the building at 90 West Street where the National 9/11 flag originally hung, tattered and torn.  Elsie says her daughter was an extraordinary girl with a beautiful heart-full of compassion and love. She was always the go-to person for all her friends.

​Elsie first saw the National 9/11 Flag when she attended a 9/11 dedication at the USS New York. It was here that she met Jeff Parness, founder and executive director of the New York Says Thank You Foundation. The National 9/11 flag had been previously patched back together in Greensburg, KS and was now on display at the NY ceremony. Cintron-Rosado said, “The National 9/11 Flag was found on the 90 West St building where my beautiful Maria worked. I met Jeff Parness the week the USS New York was going to get commissioned. At the commissioning ceremony, I placed a stitch in the flag, along with my friend Mary Ferguson who lost her husband, George, on 9/11 and was with Maria.”

These first few stitches would spark the 50-state journey to restore the flag to its original form.  Elsie began volunteering with the New York Says Thank You Foundation to help with the Flag Restoration Tour. She traveled to stitching ceremonies in Atlanta, Baltimore, Kennedy Space Center, and of course to her own residence in Ocoee, FL.

Cintron-Rosado said: “The National 9/11 flag did a lot for me. It took me out of this deep dark depression. I met a lot of people, and it gave me something to do. It was really good for me. I did some of the tours with the New York Says Thank You Foundation. The 9/11 Flag Tour brought me back to life and gave me a purpose. It was the beginning of the healing process for me.” In a 2014 interview with CBS News, Cintron-Rosado noted,  “I want this flag to be a symbol-from broken we are new-we are whole.”
BUY THE BOOK